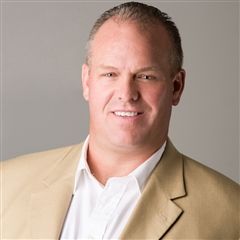 Hunter Jones was born a leader. His passion is leadership and he aims to serve and inspire others to succeed.
He strives to live his life by the following Ralph Waldo Emerson quote, “To laugh often and much; to win the respect of intelligent people and the affection of children; to earn the appreciation of honest critics and endure the betrayal of false friends; to appreciate beauty; to find the best in others; to leave the world a bit better, whether by a healthy child, a garden patch, or a redeemed social condition; to know one’s life has breathed easier because you have lived. This is to have succeeded.”

Hunter served honorably in the Air Force for 18 ½ years, and retired as a Lieutenant Colonel in 2015. He was awarded a Bronze Star in 2013 for his leadership in helping defend a vital airbase in Afghanistan. He now serves as a consultant with Booz Allen Hamilton, where he works with special operations to manage and support warriors in the Middle East.

Born and raised in Berwyn, Hunter attended Hillside Elementary School and West Chester Friends School before coming to Malvern in 7th grade. He was a driven young man, and knew at the age of 12 that he wanted to attend the United States Naval Academy.

“I was determined to go to the Academy, even though I knew it would be difficult to get in,” he said. “I charted my course and was proactive in achieving my goal. I worked hard to get there and graduate.”

Working with football coach Gamp Pellegrini P'87'90, as well as his teachers and counselors, Hunter made sure he was positioned to achieve his goal.

“I think Hunter possessed a healthy respect/fear for both the course and me when he was in my class,” said Upper School English Teacher Rich Roper. “There was no assignment too long or difficult that he did not attack with all of his talent and skill.”

“He was one of the most dedicated students I had,” adds 7th Grade Academy Leader and Middle School English Teacher Leo Kindon. “Everyday he came to school and he worked hard to be at the top of the class.”

While at Malvern, Hunter was involved in a number of sports.

“I was a big jock,” he said with a laugh. “I played football, basketball, lacrosse, and I wrestled. My coaches would kick my butt, but that made me better. I ended up being named the wrestling State Champion my junior and senior years.”

One of his favorite memories of his time at Malvern that sticks out for Hunter is his senior year football season. The team was coming off a 2-9 season and Hunter was elected captain with Brian Gallagher ’92. The two chose to meet with the team and set the tone for the season.

“We said to the guys, ‘that season isn’t us, we’re winners’ and the team really stepped up and played at another level. We ended up winning the Inter-Ac and had a great season,” shared Hunter.

It is that mentality that has helped Hunter successfully lead and manage teams in both combat and non-combat zones.

“If you take care of your people, they will take care of you, and if you go above and beyond you’ll see instant loyalty,” said Hunter. “I’ve led like that my entire career and it has never failed me.”

During his 18 ½ years in the Air Force, Hunter traveled all over the world and grew his leadership experience. He spent time in California, Germany, Washington, D.C., as Head of Secret Service for the Chief of Staff for the Air Force, traveling to Korea, Japan, Australia, and all over Europe, Utah, Alabama, Afghanistan, and Florida.

Hunter and his family will begin a new chapter in their lives as they return to the area, and his sons, Hunter Jr. and Heath, start at Malvern Prep in the fall of 2018.

“It’s bittersweet knowing they’ll be attending Malvern,” shared Hunter. “I brought them to campus in 2015 and they love the culture, the brotherhood, and the campus. The brotherhood has been a theme throughout my entire life, with Malvern, the Naval Academy, then the military, so that is something the boys have grown up with. I’m honored that my kids are going to my alma mater. They will be in an atmosphere where they will grow and thrive.”

Hunter is a man who stands by his word and epitomizes the “do as I do” mentality. He strives to show good behavior and strong leadership skills so hopefully today’s kids will take those lessons to heart and become strong future leaders for this country.

“If this country and community is better because I have lived, then that’s something.”
Back