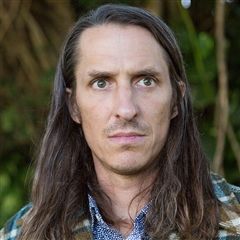 “Patrick looked at things a different way than other people. That is one of his gifts,” says  Rev. Jim Flynn, O.S.A. T Hon. Director of Stewardship and Outreach.
“He was one of the most observant people I’ve ever met. If you asked him to share what he saw in the classroom, he could tell you every detail, from someone’s shirt color to the tie another person was wearing.”

Being naturally observant is a characteristic that comes in handy as Patrick Bresnan ’95 and his wife, Ivete Lucas, are making a name for themselves in independent film.

“We enjoy learning about people and volunteering,” says Bresnan. “A lot of our filmmaking has come from an interest in doing disaster relief, rebuilding projects or volunteer trips. We have an interest in telling stories about social conditions.”

Bresnan and Lucas have four documentaries on their credit, including: The Send Off, One Big Misunderstanding, The Rabbit Hunt and The Curse and the Jubilee. Two of the films have been featured at the esteemed Sundance Film Festival. Their first film, The Send Off was nominated for the Documentary Short competition in 2016 and their second film, The Rabbit Hunt was also nominated for the Documentary Short competition in 2017.

Bresnan and Lucas are currently working on a feature length film about senior year in high school. It is currently in production and stemmed from The Send Off.

“The Send Off showed us that there was something very interesting about rural America that was out of the view of a lot of us who lived in cities or more affluent areas,” says Bresnan. “The film we are making now is about a high school that is primarily Hispanic and African American students. We are filming the rituals and rites of senior year with the backdrop of kids who may not be able to afford college, or have parents who can help them understand how to get into college or apply for financial aid.”

An Early Start at Malvern
Bresnan credits his official foray into making documentaries when he met Lucas in 2008, but he has been working with film since the age of 15.

“A friend of mine had a video camera and we would videotape stunts and reenact characters at the zoo and local strip malls - like the precursor to Jackass,” said Bresnan. “Mr. [Bob] Colameco would let us play our skits after the TV morning announcements.”

Colameco started the TV Studio in the early 1990s after then-Head of School, Jim Stewart P’86’94 PT Hon, had televisions installed in each classroom.

“I thought about the potential to reach the entire community and pitched the idea to Mr. Stewart. He approved, and with six other students and the help of Mrs. [Elizabeth] Driscoll P’07, we produced the first show.”

Colameco encouraged students to film various events around campus or other types of videos to share.

“It was great that Patrick and his friends were so interested in film. I wanted to give them an opportunity to share their work with the larger community,” Colameco says.

Formative Experiences
One of the first documentaries Bresnan created after graduation from high school came together on a whim while on a service trip to Ivanhoe, Va. with Malvern students.

“We were working in the town and one of the young boys whom we grew to know would come from the town to eat dinner with us. He was so fascinating and would ask me if I could record him giving a tour of the town. I did, and that short documentary is called Please Come Visit Ivanhoe,” Bresnan says.

“Patrick was a never-ending source of energy and inspiration,” says Stewart. “I was inspired to see a young man come back to donate his time and experience. It’s a real testament to his commitment to Christian Service and his allegiance to Malvern Prep.”

“I loved having Patrick chaperone the service trips because I knew that the kids were always learning,” says Larry Legner GP’16, Director of Christian Service. “He was always great with the boys. He would oftentimes stop what they were doing and explain to the boys why it was so important to do the task correctly the first time around.”

Patrick is grateful to the men and women at Malvern who helped shape his experiences and mold him into the man he is today.

“My teachers were very humble people,” Bresnan says. “What the teachers and priests instilled in me was that sense of volunteering, caring for your fellow man. On my service trips with Mr. Stewart it was moving to see how much he enjoyed being in Appalachia with the boys who were getting ready to go to college. He would be teaching them how to build a roof, but also, and probably more importantly, teaching them to be respectful of new cultures.”

The Long Journey to Sundance and Beyond
Bresnan and Lucas have an exciting year ahead, with The Rabbit Hunt being featured at Sundance and with the continued production of their first feature-length film, things aren’t slowing down for these dynamic documentary filmmakers.

Legner offers one final bit of information that speaks to the kind of person Bresnan is, and the impact he strives to make with his documentaries.

“He has a skill of being able to share a story without putting the other person down,” Legner says. That enables the listener to see what he sees. He has a keen awareness of people and a heart that wants to help.”

Bresnan encourages any students who are interested in film to stick with it.

“I’m 40 and I didn’t get into Sundance until I was 39,” he says. “I’ve worked jobs that my peers would look down upon, but I knew I had to keep making a little bit of money and not have a career that took me away from filmmaking. You have to be willing to make sacrifices to make films. It is hard to teach yourself how to be a filmmaker or artist, but being in a city or going to a college that has a strong art community, where there are opportunities and people who work as artists, is very helpful.”
Back